Building a box into the kitchen cabinet, that will hold the induction cooktop. Finishing it off with some Formica.

Building kitchen cabinets and fitting them in the van. Finding out if it all works or that I have to make adjustments in the design. First time inside the van standing in the shower pan, calculating where the shower head END_OF_DOCUMENT_TOKEN_TO_BE_REPLACED

After the installation of the Murphy bed, I started working on the rear kitchen of the van. The bottom drawer will contain the shower pan that I constructed some time ago. Watch my upcoming video.

After the decision to buy the Samlex 450w inverter, it was a matter of ordering on-line.

I received the SAM-450-12 Modified Sine Wave Inverter this morning and by all means, it’s a fairly small and lightweight device, but that’s to be expected when we’re dealing with these small loads.

After upgrading to off-grid power and power storage, this post elaborates on the available power generating tools for a small RV. The electrical calculations are comprised into a detailed schematic overview, that serves as the basis for the installation.

The extra power from the alternator can be directed to the battery bank, to give the batteries an extra charge while driving. You likely have to install a heavier alternator.
I plan to move little once at my vacation destinations and as my research indicated a possible limited benefit, I will forego this option at this time.

Staying completely off-grid (boondocking or stealth camping) is the goal, but as the situation may require, a visit to a campground is an opportunity to replenish some battery power.
The battery charger is connected to the 110V external power inlet, that in turn can be connected to a 15 amp electrical outlet with a heavy extension cord.
With 420Ah in batteries and a charger rated for 15%-30% of it, the IOTA DLS-55 55 amp charger would be a perfect fit.

With a van, storage is always a major issue. In addition, the fuel is dangerous and smelly.
Personally, I never understood, why one goes through the trouble of finding that one, exclusive location, to have it disturbed by the noise of a running generator.

Panels are largely maintenance free and prices are still coming down. They are a great solution for off-grid camping, with some limitations on cloudy or rainy days.
With 420Ah in the battery bank, a balanced system ideally requires an equal amount in watts (420W) as panels.
That poses the problem of roof space on a (cargo) van. On my current Dodge, the available space is limited to 100” to 130” lengthwise with a 50” width and that includes the installation of a fan. Most available larger and cheaper panels are approx. 60” x 40”; where two pv panels would suffice, no room is left for the fan.
A better solution is four 47” x 22” photovoltaic panels from AMSolar or equivalent, that occupies about 90” of the roof, with plenty left for a fan. A consequence is the lower voltage rating of these panels of about 18 volts, which reduces the benefit of a MPPT controller.

With the planned propane cooktop and heater, a small 300W pure sine inverter is more than sufficient to power small loads, like a printer or scanner. Most small appliances, such as laptop and cellphone, that are ordinarily charged on 110V, will all have their own more efficient 12V inverter.

While finishing the multi-use cabinet, the idea of installing an induction cooktop developed as a possible alternative. I have been cooking with induction for years now and the advantages over gas are great. Extremely safe and efficient. With a different solution for heating, I could eliminate the proposed undercarriage, propane tank.
One obstacle is the power it requires to operate. Research on the different forums, leaves the issue unresolved. To experiment with induction, a larger 1000W-1500W inverter is required.

The calculated size of the battery bank, the number and size of the solar panels and the other derived equipment are all comprised into this simple diagram.

Now that the different parts of the electrical system have been established, the first thing to do is calculate the number of batteries needed to support the daily energy use. Here a lot of time goes into researching all appliances that will ultimately be installed. Adding up their amperage use, will yield our daily ‘electric bill’.

The choice of 6V deep cycle flooded cell batteries is mostly based on performance, availability and price point. The disadvantage of requiring maintenance and venting can be incorporated in the monitoring process, making it part of a schedule.

Walmart, Sams Club and Costco carry these ‘golf cart’ batteries, often at a very low price. The Trojan T-105 battery is a good alternative if nothing else is available.

Calculating the energy requirements needs an inventory of all electrical appliances.

Daily average RV use is less than 100Ah

Batteries should never be drained more than 50% of full charge. With an estimated daily use of 104Ah, a minimum battery capacity of 104Ah x 2 = 208Ah is needed.
Two 6V batteries @ 210Ah would suffice, while four 6V batteries @ 420Ah would provide 2-3 day buffer on rainy days.

Phase in the installation:

Expand your system as needed.

As I am struggling a bit to finish the multi-use cabinet,  the next phase of the van conversion will entail some of the wiring for the off-grid electrical system. Before any new cabinets are built, cables have to be laid. At the same time, buying a battery charger, inverter, some batteries and an induction cooktop, will give give me ever more use of the van, while the conversion is underway.

The current electrical system of the van consists of a few lights, powered by the van’s car battery. While I do not intend to live permanently in the van, my goal is to be completely self-sufficient on trips that might last up to a couple of months.
Upgrading to go off-grid involves power storage, generation and monitoring.

The Trojan T-105 battery is the standard, Sams Club golf cart batteries are similar and cost less. Four of them give 200Ah if drawn down 50%.

Daily monitoring your off-grid system is crucial for the longevity of its parts. Maintaining a sufficient battery charge will extend its battery life.

After my last post, I took a short brake, but now I’m refreshed and at it again. We are in the final stretch of the multi purpose cabinet and next time I hope to have it ready to install in the (cargo) van conversion.

Meanwhile, to prevent any noise made by the cooktop cover while driving, two rare earth magnets are installed and covered by a thin wood plug.

A bit of super glue does wonders.

Next is the folding shelf.

It’s attached with a piano hinge at the bottom and two bolts at the top. The open space above is the second access to the cooktop.

Time for some paint work. The maple top and the two vertical decorations got three layers of paint. The gray color should contrast the reddish finish of the cherry cabinet.

The top is attached to the cabinet with 4 screwed in blocks.

At the same time, both side panels are fitted and temporarily installed. With those panels installed, the electrical outlet follows. I use the scroll saw to cut out the hole.

And finish it off with the outlet and plate.

To change the very solid look of both sides and to accentuate the airy feel of the two front legs, the legs are cut out and the opening finished with a downward curve. 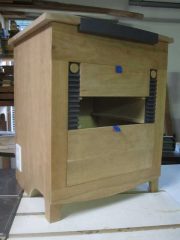 Previously I messed up one of the drawer bottoms of the cabinet that I’m making for my (cargo) van conversion. First redo that, then do the top surface with access to the cooktop. After all the major parts have been put together, only the hardware, the finishing and final installation in the van remains.

The drawers are done but now we’re approaching the end of this mini-project, I still had to fit the sub-cabinet box to the step-up area in the van.

Another small job is the installation of the shelf side hinges. A recessed space has to be created on both sides of the shelf/door.

With a straight router bit, I take three passes to get to the depth of the recess. The Cherry side panel is wide enough to act as a stable base, while using its side as a guide for the router.

A screw hole is pre-drilled and some wax is applied to the screw to ease it into the wood.

The hinges are now ready for the shelf.

The top of the cabinet needs to have an access to the cooktop during interior use. A 14” x 14” maple square will be attached with a piano hinge to a Cherry frame.

I oversize the 3/8” thick panel and then remove narrow strips on each side, which are then flipped over to the bottom of the piece. This way, I’ll save a little weight on an already too heavy cabinet.

Then again lots of sanding to get everything flat and straight.

The Cherry frame around the lid has two boards on the sides and a long board in the rear.
They will be held together with the help of a sliding tenon.

Both ends receive a mortise, made with a stationary router.

Then a loose tenon is made out of the same material with the corners rounded to conform to the router made mortise.

Finally each end is glued together.

The lid and a temporary brace are used for final adjustments to the frame during glue-up. Let it all dry overnight to obtain a good bond.

The next morning the sides are trimmed and sanded. The piano hinge is temporarily attached so its thickness is accounted for when establishing the front curve of the cabinet top.

At the same time a 2” high overhang is glued to the front of the lid. It functions as the lid handle and is part of that front curve.

The front of the cabinet top has a curve that is similar to the one at the front bottom of the cabinet. The same technique is used to establish the curve.
Take a thin piece of stock, hold it at both ends at the required depth of the curve (here I use 2 clamps for that) and pull it out to the desired point at the center.

Draw a line and cut the curve on the bandsaw. It’ll need some sanding to bring it to a graceful curve.

The cabinet is now close to its final form and shape.

The simple, gentle curves complement the overall design of the cabinet.

Build a stealth camper out of a basic cargo van.