Another post on wiring of the van. Two heavier wire gauges will support the appliances to be installed on the driver’s side.

Most of the wiring has now been done on the passenger side, except for the #4. The focus is now on the appliances that will be featured in the row of cabinets on the driver’s side of the van.

For a while now, I decided to go with a small electric pump to power the faucet in the kitchen sink and the 12V NovaKool R4500 fridge for my supplies. As an option I would like to add a Propex propane heater for those cool nights. I will take a small risk by calculating the wire sizes based on these appliances, as I might go with different brands or better options. In addition, another 12V outlet will be fitted in the kitchen area.

As the fridge is the largest, continuous electrical consumer, a proprietary cable is chosen consisting of two individual 8 AWG wires, as recommended for distances up to 32ft (the actual length is approx. 25′).

The remaining pump, heater (1.4A continuous running), 12V outlet and some lights are to be connected to a separate 12/2 AWG run of wire.

The 12/2 wire at the top, is a double landscaping wire; the bottom two are 8 AWG single wires, all of them are stranded, as these are easier to handle than solid wires.

All cables start at the battery compartment and are partially led through the channel. Midway the landscape wire appears and is tucked away to the side.

As I still have to remove both the ceiling and all of the opposite wall panels, I’ll leave the wires here, until I star working on the remainder of the van.

The same process is applied to the #8 wires.

First along the channel to the ceiling.

Then to the rear of the van. 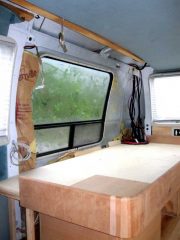 All the wires are labeled; they’ll be tied in place at a later time.

Only the #4 welding wire remains to be done; that is used between the batteries and the solar components, like controller, charger and inverter.

Sign up to receive our newsletter.
We promise not to annoy you, but if you wish, you may unsubscribe at any time.
Go to mobile version